posted by Gaines Kergosien
Carpenters must keep an organized work space so they can find their tools and work efficiently. Developers are no different, except instead of a peg board our tools hang on a task bar. There are three tools in particular that I've come to depend on and, unlike expensive carpentry jigs and fixtures, these are completely free!

ClipX
How many times have you copied something to the clipboard only to realize you just replaced something else you needed? Considering how integral the clipboard is to software development it's amazing there hasn't been more innovation in how we copy and transfer values. With ClipX you can now keep a clipboard history and with a simple keystroke (CTRL+Shift+V) paste any text or image from history. 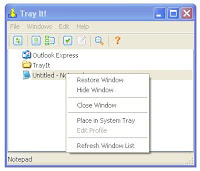 TrayIt
If you're like me you probably need a number of applications throughout the day and it doesn't make sense to close them down only to open them right back up next time. My task bar used to get cluttered with programs waiting to be used until I found TrayIt. Now I can minimize those apps to the system tray so they use minimum real estate and I know exactly where to find them. TrayIt makes it easy to create profiles for specific applications and is extremely flexible. 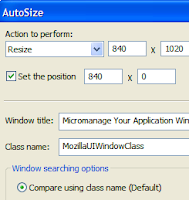 AutoSizer
So much of our time is spent rearranging windows. This can be especially annoying when you find yourself having to move the same window over and over. AutoSizer takes the headache out of window placement by letting you specify the size and placement of each window once so you never have to do it again. Make that annoying popup appear minimized or messages appear in the corner of the screen.
Read More

posted by Gaines Kergosien
In my last article, Hewlett Packard HDX18 Woes, I wrote about the numerous problems I've encountered with my HP HDX18 notebook and how Hewelett Packard intentionally makes the support process difficult for the consumer. What I never expected was that they would sink to a new low by claiming out of warranty liquid damage and ignore the fact that I spent an extra $120 on a year of Accidental Damage Protection (ADP). A quick internet search shows that HP is willing to call just about anything liquid damage if it helps them avoid warrantied repair. This post at Ars Technica is just one example where HP's "proof" was laughable.

Here's the photos of my notebook sent by the HP representative. 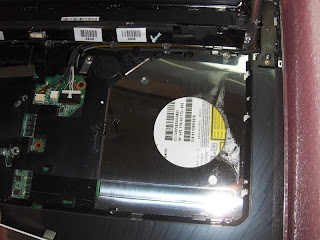 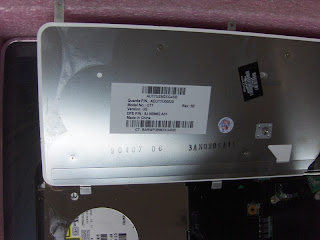 Notice that there are no pictures of the actual motherboard or other electronic components, only the keyboard tray and DVD ROM case. Could this residue be a result of a spilled liquid? Possibly. Does it indicate that the notebook was damaged by spilled liquid? Not unless that keyboard tray or DVD ROM case is malfunctioning. Their claiming the fan and touch panel needed to be replaced and those are located on the other side of the notebook.

As I said, whether or not there is actually liquid damage is a moot point since I paid for Accidental Damage Protection at the time of purchase (less than a year ago). I was able to locate the original email confirming purchase and registration of my ADP coverage and provide the ADP serial number, however they had already escalated my case to corporate and insisted that I must wait to be contacted. When I asked for the contact information for the department handling my case I was told, "I cannot give you that information until your case has been assigned and you've been contacted."

I don't care how good of a deal it is, I would have never purchased a Hewlett Packard computer if I had known the kind of hassle I'd have to go through to get a working computer. Next step: Better Business Bureau.
Read More

posted by Gaines Kergosien
I'm hesitant to post a whiny blog as the first of 2010, but I've been putting off writing and figure you have to start somewhere...and my fellow geeks will agree that when your computer is having problems it's at the forefront of your mind.

Last year I purchased a HP HDX18 laptop. I did a lot of research, considered building my own, but in the end decided that the 40% off coupon that HP runs every few months made it too good of a deal to pass up. Looking back I might have reconsidered if I had known the problems that were hidden behind that sleek exterior.

The first major problem I had was when I would arrive at work or class only to realize that my laptop had come out of sleep mode in my bag. It seemed that when the screen opens the laptop automatically wakes up and I couldn't find any way of disabling this functionality. Unfortunately it happened on a trip while the laptop was in it's bag inside the trunk. Apparently that was the last straw as it wouldn't boot once I got to my destination. HP support had to replace the motherboard, but didn't have a solution for it waking up so I resolved to shut it down completely before putting it in a bag.

Soon after I noticed my volume would spontaneously turn up, down or mute and my wireless would disable itself, sometimes repeatedly. This was extremely annoying and I tried everything I could including reinstalling the operating system and updating drivers/software. Even after spending over an hour on the phone with support I couldn't find a solution, so I just lived with it.

I also began noticing that my headphone jacks were temperamental. It was difficult to get the headphones to properly connect and the USB port right next to the audio jacks didn't seem to work reliably.

All of this I was willing to ignore because the core functionality of the laptop worked and I didn't want to spend a lot of time on the phone with someone telling me to update drivers and reinstall the operating system.

This weekend I noticed that my laptop seemed to running very hot. I have a plastic ventilated tray for when I am not at a table, but even with that buffer the bottom of the laptop was uncomfortably hot. Last night it started dying. I don't mean crashing, locking up or blue screening. I would hear a pop and instantly the laptop was off as if it had completely lost power. I was able to boot it back up and use it for a while before it did the same thing again. I realized I was running some fairly intense software and checked out the temperatures only to realize that even under light load they were hovering around 170F at the GPU and 140F at the CPU.

Long story short, I spent some time in online chat with a support tech from India who, while very polite, was no help whatsoever. Even though he seemed to understand my issues his only suggestions were to perform updates or reinstall. I called phone support and managed to get someone in North America who identified that the issues I was having with my volume and wireless could be caused by the heat affecting the touch panel that controls those functions and authorized it for repair. Even after he decided the problem warranted repair he still had difficulty getting it through the system. At one point he explained, "They design these systems so it's as difficult as possible to authorize service."

I guess the moral of this rambling blog is, you get what you pay for, and Hewlett Packard has proven once again that they care more about their bottom line and giving the customer the runaround than providing a quality product/service. If it weren't for one abnormally helpful rep I probably would still be living with a flaky laptop rather than running their service maze.
Read More